All About Removing Lipomas with a Plastic Surgeon

All About Removing Lipomas with a Plastic Surgeon

Last week when finishing up for the afternoon one of my patients called the office.  Her toddler had grabbed hold of her earring and managed to pull it out leaving her with a torn lobe.  She said she was headed to the ER at Lennox Hill and since she knew I was on staff there (and just across the street) she asked if I could stop by to check on the repair before I headed home for the day.  I think she was a little surprised when I told her to come to my office instead because she said, “I didn’t know your office would handle that.”  Its times like these I have to chuckle and remind myself that when most people hear ‘plastic surgeon’ they think of liposuction, rhinoplasty and breast augmentation.  The fact is plastic surgery is a practice of applying aesthetic principles to surgical procedures, many of which are performed on parts of the body which are exposed and seen every day (i.e. face, neck and arms).

Like earlobe repair, lipoma removal is a routine procedure in my office.  For those unfamiliar with lipoma, it is a tumor composed of fat.  The sac that contains the fat is housed in the deepest layer of the skin and, in general, is small (a few centers in diameter).  A google search of ‘lipoma,’ however, will show that these growths can also become quite large.

The most common way to remove a lipoma begins by making an incision across the top of the growth like the dotted line above to expose the sac.  Unless the growth is so large that blood vessels into the sac have developed, it is typically unattached and can be lifted right out.  Sometimes the fat can be eliminated using liposuction with a smaller incision, but that often falls short of removing the sac which can lead to a less than optimal result.  Regardless of the method used, the goal is to leave the area looking as though nothing were ever there.  In some cases, depressions in the skin are unavoidable but a doctor with aesthetic training has the best background to make sure the result is smooth and continuous.

As I said before, earlobe repair is also very common in our office because the damaged site is in a highly visible area.  Depending on the nature of the damage I typically start by cutting out the dead tissue around the site of the rip as seen below.  From there I stitch the two sides together. 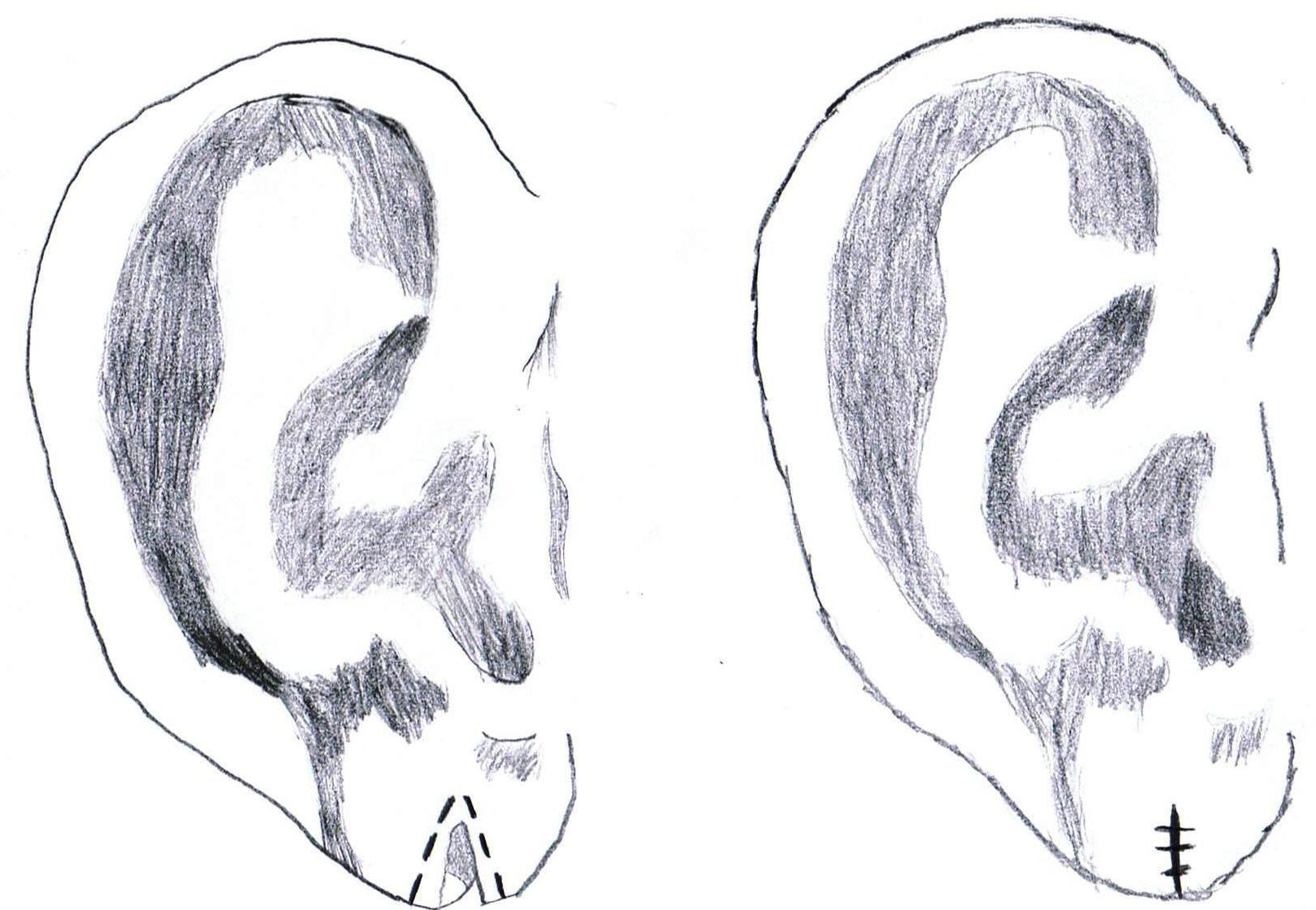 If a piece of the ear is completely missing, rather than just ripped, I can also create a graft from the patient’s skin to fill the gap. The important thing to keep in mind is that the final result looks natural and symmetrical.

There are many other procedures in which the aesthetic appearance is a major factor such as laceration repair and scar revision from tattoo removal or C-section.  Every choice, from the type of suture to the stitching style, can affect the outcome.  If you would like to hear more about what goes into creating a great final appearance, please don’t hesitate to leave a message here, facebook or twitter.

For more information on Scar Removal in NYC or Earlobe Repair in New York, visit our webiste.