When discussing surgery of the breast, one of the most common questions asked is “will I still be able to breast feed?”  The short answer is yes, so long as mammary tissue is retained and left attached to the nipple you should still be able to attempt to breastfeed.  That being said there are some women with large breasts that make very little milk and some with small breasts that make a lot of milk.  There are many factors involved and some subtleties to each procedure that should be mentioned.

Patients undergoing a breast lift (mastopexy) retain the ability to attempt breastfeeding, but face certain risks.  During the surgery an incision is made along the crease underneath the breast, around the areola, and vertically between the areola and the base of the breast. 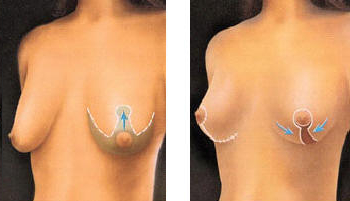 When the excess skin has been removed, the areola is repositioned to complement the new shape of the breast before the incision is closed.  During mastopexy the veins, arteries, lymph vessels, nerves and the milk duct remain attached to the nipple in order to ensure functioning in the future.  While loss of sensation due to the incision is a risk, my office experiences a very low complication rate.

Breast reduction patients also maintain the ability to attempt breastfeeding, because tissue is typically removed from the side leaving the central functioning tissue intact, and attached to the nipple.

Having implants has no affect on your ability to become pregnant.  While your breasts will experience normal change with pregnancy and ageing, the implanted portion of the breast will remain the same, with or without pregnancy.  I’ve had patients who chose implants after their initial pregnancy, as they liked the feel of the larger breasts while they were nursing and wanted to maintain the fullness.  As an example, one of my patients had breast implants after her first two children, then had three more children and breast fed all 5 of them (3 of which were after the implants were inserted).