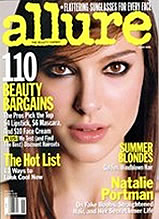 Gay Block still remembers the moment she first saw the pictures of herself and her identical twin, Gwyn Sirota, before they got face-lifts. "Not only was I mortified, I was sick to my stomach. For two days."

Though she has a sense of humor about it now—Block calls herself "the bad twin"—at the time, she was disturbed by the proof that years of excessive sun exposure had made her look so much older than her (formerly) identical sister.

Gay Block at 59 (left) with deep wrinkles and sagging skin. Her twin,
Gwyn Sirota, spent less time in the sun, and it shows.

Block and Sirota met New York plastic surgeon Darrick Antell, who took the pictures above, in 1997 at the annual Twins Festival in Twinsburg, Ohio, where he photographed hundreds of identical twins in an attempt to document the environment's effect on the skin.

"I was really taken aback by some of the differences in aging," he says. Block and Sirota, then 59, particularly stood out, and when Antell interviewed them, he says, "It became pretty clear that sun was the main villain in this case."

When the sisters were in their 20s, Sirota stayed behind in their native Baltimore while Block moved to California and be came a long-term sun worshipper, taking frequent trips to nude beaches in the '70s. "I turned hippie," she jokes, " and Gwynny stayed straight."

Block, who turned "straight" once she became a born-again Christian, also did missionary work for a couple of blazing summers in China and Thailand and now lives year-round in Hawaii.

Block (left) and Sirota in Hawaii when they were about 42.

What's remarkable about the twins' skin, Antell says, is the synchronicity of the visible aging—with the exception that, for Block, it's much more pronounced. "The pattern of the crow's-feet around the eyes, for instance is very similar— the lines are essentially in the same spot, but they're deeper and more severe in Gay," says Antell, who has observed the same phenomenon around the mouth and in the "more excessive" skin of Block's upper eyelids.

(As it turns out, once Block decided to proceed with plastic surgery, Sirota, who has often found it hard to distinguish her own looks from her sister's, elected to go under the knife, too.)

The lesson, Antell says, is that it pays to practice "defensive aging," which includes "avoiding smoking, excessive sun exposure, and minimizing stress."

Some of Block's sun damage—rougher skin texture and reduced elasticity due to collagen breakdown—couldn't be repaired by surgery.

"Gay's skin definitely has a different tone to it," Sirota recognizes now. "There's no two ways about it—the sunning was definitely bad on her. Every year we get older, it's more and more obvious."