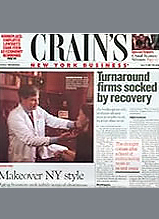 Dr. Darrick Antell is so proud of the subtle effects of his work that his anesthesiologist had a bumper sticker made for the Manhattan-based plastic surgeon.

While he hasn't actually put the bumper sticker on his car yet, it's a perspective that finds favor among the steadily growing and increasingly diverse group of New Yorkers seeking cosmetic surgery these days.

Despite a plethora of plastic surgery makeover shows and the visibility of celebrities who have clearly had many cosmetic procedures, most New York patients don't want to look "done" and are likely to seek out smaller, less invasive procedures that leave them looking like well-rested versions of themselves.

As in the rest of the country, plastic surgery procedures are on the rise here in part because of the general public's increased exposure to shows such as Extreme Makeover, Nip/Tuck, The Swan and Dr. 90210. The number of face-lifts increased by 46% between 2002 and 2003, while the use of more noninvasive techniques, such as Botox injections, jumped by 133% in patients under 40 in the same period, according to recently released statistics by American Academy of Facial Plastic and Reconstructive Surgery, or AAFPRS. Locally, cosmetic plastic surgeons report that their own practices have grown 30% to 40% over the past few years.

New York City, where socialites, celebrities and fashionistas converge with some of the top names in medicine, has long been an epicenter for plastic surgery. But a flood of aging baby boomers, combined with improved techniques and greater awareness of new cosmetic procedures among consumers, is fueling the boom in face-lifts, breast augmentation, liposuction, laser treatments, Botox and filler injections, and eye and nose jobs. The less invasive techniques appeal to an expanding demographic of younger and middle-income patients.

"We've never been busier," says Dr. Richard D'Amico, assistant clinical professor of plastic surgery at Mount Sinai Hospital and a board of director of the American Society of Plastic Surgeons. It's the 35-year olds seeking a little maintenance, he notes, who are adding to his patient volume.

Doctors say that the spike in patients became more noticeable after Sept. 11, when traumatized New Yorkers decided that life was too short not to make a few improvements. The stock market crash and a protracted recession also prompted more women and men to freshen up their faces as well as their resumes in the wake of greater competition for jobs and capital.

Even college students are going under the knife during summer vacation, in part because they want to improve their looks before they embark on their careers, according to Dr. Stephen Greenberg, a New York City - and Long Island-based plastic surgeon. Dr. Greenberg reports a 40% increase in college-age patients over the past five years.

But the surge in procedures isn't' likely to be as apparent on the streets of Manhattan as in Beverly Hills, where inflated breasts and lips to match are the norm. Dr. Antell and other top New York surgeons were approached by producers of the recent spate of plastic surgery shows, but they declined to participate, for fear of alienating their more conservative patients.

The older generation of plastic surgery patients, easily identifiable on Madison Avenue by that "face caught in the wind tunnel" look, doesn't represent the majority. These overdone society matrons are walking advertisements against having cosmetic procedures, he says.

Sandy Vizzone is typical of the new wave of New York patients.

The 45-year-old housewife, whose husband works in the fashion industry in Manhattan, felt that her face was aging faster than her body. She wanted to look good for herself and the many parties she attends, but she didn't want to shock her children or be judged by neighbors in the New Jersey suburb where she lives. So after consulting five doctors and researching several procedures, she chose Dr. Antell to perform a mid-line face-lift to tighten up her jowls.

Ms. Vizzone was dismayed at first that nobody noticed how much better she looked. "But then I realized that was a good thing," she says.

A recent patient of Dr. Antell's chose to have a blepharoplasty, or an eye-lift, because he was about to take his company public. The executive, who was in his late 50s, feared that if he looked tired he could negatively affect stock prices and leave investors wondering whether he was energetic enough to lead the business.

About 25% of men say they want facial cosmetic surgery for work-related reasons, compared with 10% of women. In 2003, men flocked to specialists, seeking procedures to soften frown lines and fill out wrinkles. During that year, surgeons reported a 66% increase in facial and neck liposuction, a 45% increase in microdermabrasion and a 30% increase in laser resurfacing, according to another AAFPRS survey. Men now make up 30% of the patients at Dr. Steven Pearlman's Park Avenue practice, compared with 20% to 25% about five years ago.

"That old bulldog look doesn't cut it in the boardroom anymore," say Dr. Pearlman. "Besides they have to keep up with their younger-looking wives."