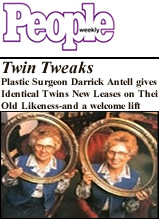 When he was in training as a plastic surgeon, Darrick Antell encountered a heart-wrenching pair of identical twin sisters. "One had been very badly burned in a fire, and the other one was fine," he recalls. "I couldn't help but think how difficult it was for them to look at each other." Antell, who now has a private Park Avenue practice in New York City, did all he could to repair the burned twin's scarred countenance. But both sisters were left with lasting damage to a prominent feature: their twinness.

Aware that most identical twins prefer to look alike, Antell, 47, began offering matching facelifts last fall to twins who, due to external factors such as accidents, smoking or sun exposure, had lost some of their resemblance to each other. Antell says that because identical twins — who develop from a single fertilized egg, unlike fraternal twins, who start life as two separately fertilized eggs — have identical genes, they offer a rare opportunity to study how environmental factors affect aging in general and cosmetic surgery in particular. (Though his original intent was to operate on just one twin and use the other as a control, "none of them wanted that, " he says.) Antell hopes that by monitoring the progress of five or more sets of twins on whom he has operated, he will be able to demonstrate that a well-executed facelift can hold up over a decade or longer. "Today, good plastic surgery is that which you cannot see," Antell says. "It's more natural."

For Identical Twins, says Antell (in his office),
alikeness is "part of their identity."

As natural, perhaps, as the desire of 71-year-old Ynette Sapp and Olvette Mahan to look as much alike as they possibly can. Growing up in Norman, Okla., the identical twin sisters occasionally regarded their mirror images as a burden. Adopted together as infants and made to wear matching outfits, they often got stuck sharing toys and later, friends, who, says Ynette, "sometimes looked upon (each of us) as half a person."

It's Special, "says Olvetten Mahan (right) of
looking, again, like her identical twin Ynette Sapp
(at home). "Dr. Antell is a good guy."

But as adults, Sapp and Mahan, who live in lookalike homes across the street from each other in Enid, Okla., discovered that "it's fun to look alike," they say in unison. Now they enjoy wearing the same outfits. Both work as nurses at Wheatland Mental Health Center in Enid, where they can swap shifts with impunity. And last year, as Tweedledum and Tweedledee at the annual twins festival in Twinsburg, Ohio, they won a gold medal for costuming.

When Dr. Antell attending Twinsburg to recruit subjects for his study, met Sapp and Mahan, he didn't have to ask twice.; the sisters had long lamented the fact that as they aged, they had come to look less and less like döppelgangers. Among other things, Ynette's smile "didn't curve up like it used to, " she complains. "(Too many) hours in the sun."

Supported by a benefactor who, Antell says, prefers not to be identified, the physician offers his services free to the twins he selects for his study. (So far only women have volunteered for the facelifts, which would normally cost about $12,500 each.) Subjects pay only for an anesthesiologist and their own travel expenses. So one day last November, Sapp and Mahan visited Antell at his Park Avenue suite. They emerged three hours later, bandaged and bruised, but quite pleased to be back on the road to sameness.

Antell, who lives in Greenwich, Conn., with his wife, Elizabeth, 36, a nonpracticing physician, and their three young children, traces his fascination with twins back to his childhood. Richie and Ray, identical brothers, lived next door to him in suburban Cleveland. The passion for plastic surgery, sparked by a mentor, overtook him when he was in dental school, so after earning his dental degree he went on to the Medical College of Ohio, in Toledo. Given his interests, he explains, it was only a matter of time before he would embark on a study of plastic surgery on twins. "All plastic surgery has to do with people wanting to look alike," says Antell, who had his own eyes done at age 32. "People want to look what they consider normal."

By Alec Foege and Bob Stewart