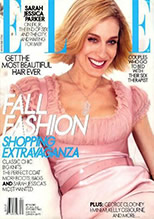 Facial Implants promise to fill the places where nature fell flat. Are supermodel cheekbones just a silver of silicone away?

To capture the full attention of a celebrity, just tell a plastic-surgery story...augmentation aficionados are trading tales of a far more complicated procedure — facial implants, the art of creating a contoured, highly photogenic visage with permanent silicone or Gore-Tex inserts.

From Cleopatra to Kate Moss, high, chiseled cheekbones have been a constant historical beauty hit. " No matter how much you exercise or lift weights, you can't build a chin or cheekbone," says Darrick Antell, MD, a New York cosmetic surgeon.

An implant-enhanced chin can help balance a strong nose, as well as make the neck appear more swanlike. "A modest chin implant increases the distance from the chin to the throat, making the neck appear longer," Antell says.

Every surgeon has [his] own technique, but the nuts and bolts remain the same: Cut a hole, push a piece of rubber in it. and sew it up. The hole, known as a pocket or tunnel, is made by cutting through the tissue with scissors or a pushing instrument. General anesthesia is usually required, and the surgery takes about 30 minutes.

With the chin, doctors go through a small, fairly inconspicuous incision (approximately one inch long) on the underside of the jaw. "Most people have an old scar or crease under their chin anyway," Antell says. The implant can also go through the mouth in the lower lip. "But there's a slightly increased chance of infection because of all the bacteria in your mouth," Antell warns.

With cheeks, implants go either inside the mouth, up above the lips, or down through the lower eyelids. "The implants are sometimes sutured to anchor them in place, but most often doctors will just sew up the incision. Scar tissue eventually grows around the implant, with firmly secures it in place," Antell says. If the tunnel is made too large, the implant could shift.

Most patients are advised not to exercise or eat crunchy foods for up to six weeks. During the first month, pressure applied to the face (such as pressing a phone hard against your cheek) could dislodge the implant. "You could inadvertently push it up in your sleep," Antell says. "But only 5 percent of patients have perceptible shifts."

Implants can shift up, down, or sideways over time. Edges can show through the skin. Your new cheeks should be asymmetrical. "When there's two of anything, there will be differences," Antell says.

But for those who spend more time in front of a camera than with real people, the contour enhancement provided by implants can redefine a career. "Recently, I gave cheek implants to a very young model," Antell says. "Her cheekbones were flat and did not photograph well. She looks amazing now."

For those of us not in the spotlight, looking good in the real world is what counts. Combine a qualified doctor with an educated client, and you'll likely find an implant success story. When one of Antell's patients dropped a few dress sizes, she felt as if she had lost her looks along the way. "She liked the way her face appeared when she was heavier. She preferred to keep the pounds off and get cheek implants," Antell says.