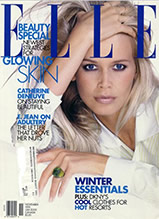 I knew the time would come when I'd have cosmetic surgery; I was brought up to suffer for beauty. Metal curlers. Merry Widows. High heels. What's a week or two of bruises in a lifetime of vigilance and sacrifice? The question wasn't whether, but when-and how to afford one of the great plastic surgeons. This is not an undertaking likely to reward the bargain hunter.

Then I signed a contract to write a book, for which I was to be paid a respectable advance. It didn't escape my notice that the subject of the book is a woman I admire who would never voluntarily submit to the ministrations of a sharp instrument, except to have her hair cut. I acknowledged the irony. Then I called a doctor whom I trust absolutely and asked him to recommend someone to fix what bothered me. He referred me to Darrick Antell, MD.

I signed up with Dr. Antell before I'd even gotten the check from my publisher. Time was short: It was May, and I was determined to look better than I'd looked in ten years by the July Fourth weekend. The plan: surgery on upper and lower eyelids, liposuction under chin and liposuction on the nether regions (between waist and mid-thigh).

The part of me that aspires to be taken seriously as an intelligent woman (not the part that has been heard to say I'd trade a few IQ points to be ratcheted up on the beauty scale) understood that I'd eventually have to find a way to turn something so superficial into an act that would raise the flag for a Larger Idea. But there would be time enough to think about that while I was recovering, during those first few days when my eyes were too swollen to read. Given three days to do little except think, I was sure I could come up with a theory.

Following the path off which I've often leapt prior to looking, I turned up at Dr. Antell's wood-paneled Park Avenue office for my surgery. (His operating room is in the basement of the building.) After I undressed, he used a marker to outline the places he'd attend to. It was some slight consolation to know that no one would ever see me in this configuration again.