Glamour - What No One Ever Tells You About Breast Implants

Glamour - What No One Ever Tells You About Breast Implants 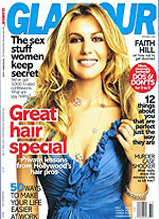 Whatever you think about breast enlargement - it sets feminism back 30 years; it helps some women find true body confidence - the fact is, more than 364,000 women will opt for it this year. This is what every one of them should know about the risks and decisions involved.

Our ideal world is a place where all women love almost all of their bodies and rely on a few simple fashion tricks to deal with the rest. But in this world, many young women take a more extreme approach to self-transformation and choose cosmetic surgery. The most common type? Breast augmentation. More than 364,000 women will get implants this year, according to the American Society for Aesthetic Plastic Surgery; that's an increase of nearly 40 percent from just five years ago. Yet surprisingly little good, unbiased information is out there about the procedure. Google it, and you'll see rosy tales on implant manufacturers' websites of women who love their new shape, or read horror stories of women who say implants robbed them of their health. It's hard to get the whole story.

"Many of my first-time patients come in thinking breast augmentation is like a rhinoplasty or liposuction - you do it, it looks good and then you forget about it," says Foad Nahai, M.D., an Atlanta-based plastic surgeon and author of The Art of Aesthetic Surgery: Principles & Techniques. "One of the first things I tell them is 'This implant is not permanent and it will inevitably fail and have to be changed.' It's remarkable how many people aren't aware of that." Did you know that implants don't last a lifetime? Or that one quarter of all women will have a "redo" surgery within five years? Or that at least 20 different implant sizes now exist? Many women Glamour interviewed were unaware of these facts, even as they were about to go under the knife - so we set out to compile a guide to the truth, with the latest information from surgeons and women's health experts.

To truly understand the nitty-gritty details, I got permission from Darrick Antell, M.D., to observe a breast implant procedure. Dr. Antell is a board-certified plastic surgeon in New York City who has performed more than 1,000 implantations and is a spokesperson for the American Society of Plastic Surgeons. His patient, Diane Gorumba, a 28-year-old Macy's department-store clerk from Brooklyn who hoped to go from a 34A to about a 34C, agreed to let me sit in. If you want to get implants, have a friend who does or if you're simply an observer trying to understand America's desire for bigger and bigger breasts, you should know what I found out in the operating room.

Implants come with health risks, and your doctor should tell you about them. Despite many charges to the contrary, studies have thus far found no conclusive link between implants and autoimmune. But there are other potentially serious complications. The most common - rupture and contracture, a hardening of the tissue around the implant that can be disfiguring and painful - affect up to 85 percent of women. In their initial consultation, Dr. Antell discussed these possibilities with Gorumba, which is exactly how a good doctor should counsel a prospective patient. But other women told Glamour that surgeons they'd seen downplayed the risks or brushed them aside completely. Marci Brehm, a 27-year-old model living in. Plantation, Florida, went into her first consultation in 2000 with a laundry list of questions. "When I asked, 'is there any way these implants could hurt me?'" she recalls, "the doctor said, 'Absolutely not, they're 100 percent safe. I'd put them in my own mother.'" Within weeks. Brehm developed extremely painful complications that lasted until another surgeon replaced her implants 18 months later.

This is serious surgery. When I entered the surgi-center at Dr. Antell's office, Gorumba was fully sedated. Using a scalpel, he made a one-and-a-half inch incision and then cut through the skin, breast tissue and muscle - to the point that her ribs were visible, looking like white sticks. He then used two gloved fingers to gently separate the muscle from the chest wall and create a space the size of the implant. This is when I realized the procedure shouldn't be taken lightly by anyone, and right on cue, I began to feel light-headed and sweaty. Sensing I might faint, the nurse placed her hand on my back and quickly ushered me out of the operating room. "It happens to everyone the first time," she assured me. "When I was an intern. I passed out during my first amputation: I was holding the leg." Minutes later, I was back in the surgi-center.

The doctor really will remake you on the table. Gorumba and Dr. Antell had zeroed in on the final look she wanted during an earlier consultation by stuffing dummy implants into a granny bra. Still, it was clear during the procedure that Dr. Antell would ultimately be deciding her size. "The consultation gives me an idea of what size implant I will use," says Dr. Antell. "But because saline implants are inserted empty and filled during the course of the operation, I won't know the exact volume until a patient is on the operating table." As it turns out, a same-size implant can look very different in different women; existing breast tissue, musculature and other biological factors can play a role in how big or small an implant appears beneath the patient's skin. So to get the desired effect the patient wants, the plastic surgeon may use a slightly larger or smaller implant than what was discussed in the consultation.

Alison Macdonald told her plastic surgeon she wanted to go from an A to a B cup - nothing more. She asked for 276 cc implants, but the minute she woke up from surgery, she knew something was wrong. "I felt like 1 had two huge torpedoes sitting on my chest," the 48-year-old Sarasota, Florida, acupuncturist says. "Even after the swelling went down. I looked like I had gallon jugs sitting on my waist." She finally had them replaced with smaller implants by another surgeon 18 months later; "That's when I found out he had put 390 cc's in my right breast and 360 cc's in my left," she says. "I felt violated."

While he relies on his own aesthetic eye, Dr. Antell tries to stick closely to the size he has discussed with his patients. Before he chooses the final implants, he inserts sterile sizers to assess the look. I watched as he blew up the sizers, balloonlike, and surveyed Gorumba's chest. "I guessed 300 cc's would be right for her," Dr. Antell said. "And I was right." He replaced the sizers with the saline implants. Then came the most surprising moment of all: Once the implants were filled with saline, Dr. Antell asked the nurse and anesthesiologist to sit Gorumba up. Still unconscious, she looked like a real-life rag doll, head limp to one side. Her breasts, once small and athletic, were now plump and round. Dr. Antell took a step back to view his work, like an artist surveying his painting, before he asked, "What do you think?"
"Nice," the head nurse concurred.
"Beautiful," said the anesthesiologist.
"You need to see the implants in when the patient is upright for symmetry and size before you close the incision," explained Dr. Antell. He helped lay Gorumba back down and finished the surgery. Still unconscious, Gorumba had no idea that the final decision on her breast size had just been made for her. Thankful when she woke up, she loved the results.

Implants are a lifetime commitment. After the surgery, the nurse went over the post-operation rules with Gorumba: no blood thinners (e.g., aspirin), no raising her arms above her head for a week and no strenuous exercise for two to three weeks. And finally, she handed Gorumba a serial number and a lot and style number from each implant (the doctor also keeps two copies of these on file), in case of complications or even an unthinkable product recall. I later learned how important this information could be. Just before Marci Brehm, the Florida model, had her implants removed, she found out - thanks to the implants' serial number - that her unscrupulous doctor had given her ones that were manufactured in 1979. "I was so naive," she says. "I should have done my homework." Brehm is right - before any woman considers elective surgery she has to do some research.

We hope this finds you and your family in good health during these difficult times. For those who may have suffered a loss, we extend our deepest sympathies.

As many of you know, we decided to shift our practice almost entirely to telemedicine when the COVID-19 pandemic started. Being located in the heart of New York City, we felt this was a necessary decision to help keep you and our other valued patients safe. We want to thank you for your patience and understanding throughout the last few months as we navigated the new and unique challenges that this health crisis has thrust upon us.

We are happy to announce that we have resumed seeing patients for consultations, office procedures (including Botox and fillers), follow-up appointments, and elective surgeries. Please know that, as always, we are dedicated to providing our patients with the safest possible environment. With our own NYS registered and fully accredited operating room, we are able to perform all procedures in an environment that is clean, safe, and secure. Our office is following all recommended guidance from public health authorities, both local and federal, including best practices for hygiene, infection control, and office staff health. As a result, our office might look a bit different than it has on previous visits. We are implementing numerous new protocols, including limiting the number of patients we see each day, minimizing the number of people in our waiting room, and continually and thoroughly cleaning all surfaces and exam rooms to sanitize between patients. Please know that our staff will be utilizing the appropriate PPE to protect patients and themselves.

In order to keep our office a safe space for both patients and staff members, we are asking for your cooperation with the following:

Thank you for being our patient. We value your trust and loyalty and look forward to welcoming back our patients, neighbors, and friends.