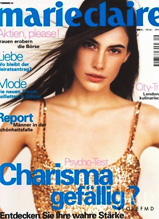 If you want to be beautiful nowadays, you have to grit your teeth: Tony sees it the same way. The 52 year-old translator takes a great deal of pleasure in telling people his age (he looks younger of course), and started with various corrective operations four years ago. The swim rings, called love handles in America, had to go. For ten years, Tony had been dieting and torturing himself doing sit-ups in the gym. Nothing helped, the rolls of fat on the stomach and back area stubbornly stayed put. The operation he had done by Manhattan's star surgeon Darrick Antell lasted only two hours. The fat was gone, and the skin shrank back within the course of a few weeks. Since then Tony "likes to show himself again in a skimpy Speedo swimsuit on the beach."

Thrilled with the results, he soon thereafter had a facelift, the bags under his eyes removed, his eyelids raised, his lips treated with his own fat. Now Tony has two thin scars just in front of his ears and is looking well-rested. In addition, Dr. Antell injects Botox between his brows, a paralytic agent which freezes the muscles so that wrinkles disappear on his forehead. Up until now, Tony has paid 53 000 Deutschmarks for the renewal work. "Even if my friends think I am crazy, I am proud of the result and am no longer afraid of growing old," he maintains. The 52 year-old describes the boost to his self-confidence as huge. "I much prefer traveling on the subway now because women pay more attention to me." His surgeon, Dr. Antell, a man with the aura of a priest, nods benevolently. Aging, as our parents suffered it, is a thing of the past. Is that what women really want? Men styled like models and movie heroes? Care for yourselves but stay as you are — you would like to shout to them — we don't only want to work on our external appearances.

But the cash desks of the surgeons continue to ring. Dr. Antell knows why: "I could save some from ten years on the psychiatrist's couch." And Bill Clinton could use a consultation with him. Why he hasn't had the bags under his eyes removed, the doctor doesn't understand. Friends of the President have told Dr. Antell that it is entirely calculated: "So that you can see how hard he is working for this country." But Dr. Antell is quite convinced that "as soon as Clinton is finished with this job, his first step will be to visit a plastic surgeon."