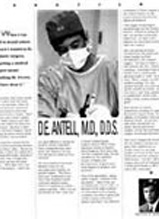 "When I was still in dental school, I knew I wanted to be a plastic surgeon. If getting a medical degree meant climbing Mt. Everest, I would have done it."

Fortunately, Rick Antell merely had to move from his home-town of Cleveland, where he earned his D.D.S. from Case Western Reserve University Dental School, to Toledo. "MCO was the only school I applied to. I didn't want to leave the state and I liked the three-year curriculum. Because of their Early Decision Program, I knew during my senior year in dental school that I was accepted."

Rick spent his summer breaks in Cleveland practicing dentistry in his father's office. His last six months at MCO, he undertook a traveling fellowship, studying at Harvard, Yale, Georgetown, Stanford and the Cleveland Clinic. "MCO gave me a very good foundation. I didn't see any great difference among the medical schools I attended. Name institutions help open doors, but wherever you go you still need to stand on your own feet."

He chose Stanford University Medical Center for his internship and residency in general surgery. "My future wife and I transferred to the New York Hospital/Cornell University Center, where I completed my plastic surgery specialty. Then I set up my practice in New York City." A board certified plastic surgeon and an officer of the American Society of Maxillofacial Surgeons, Rick states that "It's less common today, but the founders of the American Society of Plastic and Reconstructive Surgeons had dual degrees in dentistry and medicine."

One of his specialties, orthognathic surgery, combines both disciplines. "Most of the jaw reconstruction I do is in the U.S. Because of the high incidence of cleft palates in developing countries, I've done a great deal of that surgery in Ecuador, Mexico and Haiti." As a Medical Consultant in Plastic Surgery to the United Nations, he has treated patients from Kuwait, Egypt and England.

The biggest technological breakthroughs are the fixation devices. Instead of wiring the jaw, we use tiny screws and plates now. In many cases, patients can open their mouths right after surgery."

Also specializing in breast reconstruction, he prefers the saline implant for both reconstructive and cosmetic surgery. "It's hard to draw a line between the two. Patients requiring functional correction should receive aesthetically pleasing results as well." In his view, "Plastic surgery is really problem-solving. It's very creative because you can't look up the solution in a book. And you have to pay close attention to proportions, which is the subject of my current research grant."

Rick teaches at several institutions, including St. Luke's/Roosevelt Hospital Center, an affiliate of Columbia University Medical School. He lectures and writes extensively on plastic and reconstructive surgery, and he has performed surgery on national television.

He's never climbed Mt. Everest. But his medical specialty has given Rick Antell access to worlds where he can help people as diverse as the Indians of Ecuador and the residents of Park Avenue. Yet he's "still in contact with a lot of Toledoans. I made good friends at MCO and in the community."