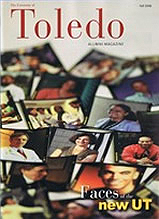 He has a Park Avenue office in New York City. He's gotten face time with a king (though he can't reveal the name), a president (ditto) and more luminaries of Hollywood and Broadway than you can shake a stitch at - yet Dr. Darrick E. Antell (MD '81) retains plenty of what he calls "my Ohio folksiness."

No trick at all, says the plastic surgeon who's made Top Doctors lists in Town & Country, Vogue and New York magazines. "I'm just sort of an old-world guy. I have conservative tastes, and I do safe, conservative plastic surgery."

In a world seemingly addicted to glitz, being a conservative physician - even with a glam specialty - doesn't explain Antell's appearances on NBC's Today and other television news shows, or being interviewed by the New York Times and the Wall Street Journal. His explanation - offered with that characteristically Ohio diffidence - is simple: "I think my entire life has been a series of fortunate accidents."

If that's true, maybe it was an early genetic randomness that started Antell on the road to medical prominence. He was, he says, one of those meticulous kids: "My mother said that as a child I would walk into a room and begin rearranging things. Even now, I organize my neckties by category. I've always liked putting things into some sort of order, which is what I find appealing about plastic surgery."

He adds, "Plastic surgeons have a saying: Form and function are related. That is, if it looks good, it'll probably work well."

In other words, seek the good fit. Antell found his when he was studying dental surgery at Case Western Reserve University. "One of the faculty was Dr. Clifford Kiehn, who had both dental and medical degrees. I started following him around, as he seemed to really enjoy what he did."

It was another fortunate accident - Kiehn had studied in England under Sir Harold Gillies, a pioneer in the field of plastic surgery, and had plenty to say about the history of plastic surgery. "People tend to forget its origins in two world wars, in reconstructive techniques for soldiers' injuries," Antell says. "Also, many founders of plastic surgery held both dental and medical degrees, allowing them the expertise to rebuild jaws and faces."

It fit, and Antell was ready to commit; his medical muse led him to the then-Medical College of Ohio and his MD. Remembering Kiehn, his plans were to apply his dental and medical degrees to reconstructive plastic surgery "treating burns and fixing problems like cleft palate. I was still concentrating on reconstructive while doing my general surgery at Stanford University." (It was at Stanford, incidentally, that he met his wife, Elizabeth, who was starting her PhD in genetics at the California university She went on to earn her MD from Cornell; they now have five children.) But his subsequent training at New York Hospital, part of Cornell University's program, took him in another direction: cosmetic surgery.

"I had very mixed feelings about staying in New York, but rather than ask my wife to transfer schools yet again, I thought we could stay here for a year," he says. "One year became two, and now it's been more than 20."

And yes, a New York practice has brought him both prominence and some prominent patients. He downplays both: "You get a little star-struck, but it passes." He does mention actress Shirley MacLaine, who once brought a third party: "She came to the pre-op consultation, to the surgery and to all post-op consultations. It was fun to have her here. People in the reception area were peeking over their magazines, pretending not to look.

"But really, the bulk of the practice is just nice ladies from the tri-state area. And about 15 percent men."

When those patients come to Antell for any of the surgical specialties he performs in his fully certified on-site operating room, they find a down-to-earth attitude.

"The producer from Extreme Makeover came here three years ago and signed our guest book. We had a nice talk. I told him that for safety reasons I believe in shorter surgeries with fewer complications. "If there's one message I can get out there, it's this: Plastic surgery should whisper, not scream."

"I hear about Michael Jackson's nose all the time, but that's excessive. When you have cosmetic surgery your friends should say, 'You look good - have you been on vacation?' rather than snap their fingers and say,' Face lift!"

But don't think that Antell's career is all cosmetic. His reputation as a researcher adds to his visibility. Particularly notable is his landmark study on identical twins, which led him in 1997 to the annual twins Festival in Twinsburg, Ohio, where he photographed hundreds of identical twins. "I was documenting the environment's effect on the skin, and I was surprised to see the differences in appearance between twins. They were due to health factors: smoking, sun exposure and stress, all of which can accelerate the aging process.

"No one had done this kind of study before, and the pictures I took of two sisters - Gay and Gwyn - with dramatic differences in appearance are still being used internationally by other physicians and specialists," he says. The resulting paper was published in The Annals of Plastic Surgery.

Another area that keeps his edge sharp is philanthropy. He's worked for Interplast and Operation Smile, which provide free reconstructive surgery to people in developing countries. He recalls his first day in the mountains of Ecuador: "We had more than 80 patients show up. These were people who had literally walked for days to get to the hospital. We could operate on only a limited number because of time constraints, but we would literally operate from dawn until dusk, then get up the next day and do it again."It's very rewarding to see how you improve lives. We worked on cleft lips, did hand surgery - and - pinned back the ears of the mayor's teenage daughter to placate the local politicians."

He's also a medical consultant in plastic surgery to the United Nations, and treated victims of the 2003 bombing of UN headquarters in Baghdad, Iraq.

Obviously, his career has been far more than cosmetic nips and tucks, but he squarely faces comments about the possible vanity of cosmetic surgery patients: "Vanity takes things to excess, but in plastic surgery, we're talking about two categories: reconstructive, for people who don't look normal and want to; and aesthetic, where someone wants to look even better. It's nice to say that we shouldn't judge people on appearances but people do. They want to look as good as they possibly can; it does give them an edge in society."

Just remember to keep it simple and safe, he repeats - then adds a joke born of seeing 20-plus years of results: "We plastic surgeons call it surgical psychiatry. We can take more years off the couch in an hour than they can in five years of therapy."