Vogue - The Face Between

Vogue - The Face Between 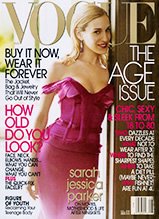 My twenty fifth college reunion is almost here. For at least fifteen of these past 25 years I had counted on having had a facelift by now. Unfortunately, the operation seemed like such a huge investment of both money and recovery time that I never got around to it. I settled instead for having my official reunion photographs retouched-which, now that my classmates will actually see me, seems like the worst possible direction to have taken.

If I'd have known about Mini Facelifts - midface miracles, some would say I might have been able to avoid all this trauma. In fact, I could have had one as recently as two weeks ago and still be ready to reune.

Let's talk about the term midface before going any further. The face is divided into three liftable areas: the forehead and eyelids, the neck and jaw, and everything in between. When you consider that the "everything in between: involves the muscles conveying emotion, you can see that this area deserves attention. A sagging midface makes the drooping of the mouth and chin more obvious; collapsing cheeks make the lower eye look puffier-all of which betray age even in the absence of wrinkles. In the past, we were stuck. The region was too exposed. But now, with slender tools and better techniques, doctors are tackling the situation directly, thus changing the way we think about age reversal and about the purpose of plastic surgery, too.

I learned this by witnessing a procedure in the operating room of Darrick Antell, M.D., an Upper East Side plastic surgeon in New York who is tall, dark, and preppy, with the perfect complexion all aesthetically inclined doctors seem to have. The patient-who preferred to remain anonymous, so let's call her Sue-was cerebrating a recovery from breast cancer as well as an"important" birthday (she wouldn't say which, though I would guess 60). She was poised, smiling, confident-happy, she said to be having "fun" surgery this time instead of breast reconstruction.

A short-scar lift, as its name suggests, involves only half a as mutch cutting as the traditional lift. This means a shorter recovery, local instead of general anesthesia, and an unstretched look. With a traditional lift, the incision starts at the temple, above the hairline. It creeps down in front of the ear, swerves behind the earlobe and merges with the lower scalp. (My hairstylist says he can always spot the scars behind the ears of clients who have had traditional facelifts.) In a short-scar lift, the incision is made along the hairline. As Antell says, the results are "very ponytail-friendly."

The surgery happening before my eyes involved very little blood; the incisions looked more like red ball-point pen lines than cuts. Instead of simply lifting the skin, Antell repositioned the underlying fat and muscle separately, like a carpet pad beneath a rug. With each small tweak, Sue instantly looked years younger.As another plastic surgeon, assistant clinical professor Brian M. Kinney, M.D., of the University of Southern California, later told me: "We used to think of facelifts as 'I'm loose, so tighten me up; I'm looser, so tighten me up some more.' Now it's about volume reconstruction. Right in front of us was this incredibly subtle thing that we weren't appreciating enough."

With procedures like the midface incision becoming more commonplace, we have entered a new chapter in plastic surgery. For a decade or so, lasers have succeeded in seducing a scalpel-phobic population into getting their feet wet in the world of cosmetic procedures. But more recently , the surgery part of plastic surgery has been slowly garnering interest among a new population as well.

Until a few years ago, women in their 40s and 50s rarely considered facelifts because they were such big undertakings that many people planned on having only one per lifetime. Now that less-invasive methods have been perfected, patients decades younger than Sue are asking for the same procedure that she is. "The Mini Facelift is definitely appropriate for younger women," says Steven Herman, M.D., a New York City plastic surgeon on Fifth Avenue.

The trend is particularly taking off on the West Coast, observes Kinney, who performs the procedures on 35-40-year-olds in the entertainment business, hoping to portray characters in their mid-20s. His other patients simply recognize that it's hard to get used to looking older. "They're very comfortable with who they are now [so] they want to have this lift to keep them looking that same way....They want to have procedures before they're droopy and saggy."

Jen, a 40-year-old Manhattanite, took just a week off for her short-scar lift last year. "I didn't want to get old and have one and then have everyone say, 'Oh, she had a facelift,'" she says. The results, she claims were subtle, yet seemed to have taken ten years off her face. "It's more about maintenance than turning back the clock."

Of course, the technique doesn't fix everything, particularly sagging cheek fat and other more extreme features requiring deeper burrowing. "Try giving one to Jimmy Carter and see what you get," says Francisco Canales, M.D., a plastic surgeon in private practice in Santa Rosa, California, who prefers traditional facelifts. These take several hours to complete and can require three months for recovery.

Sue's procedure took 75 minutes, and she went home an hour later. By the next day she lunch at a bakery with just a scarf on her head. When I saw her a week later, the stitches had already dissolved."That haggard, drawn look is gone," she said smiling. As for myself, I've got a few days before my reunion. Maybe I can still pull it off.