Zest England: The Top Seven Threats to Your Skin

Zest England: The Top Seven Threats to Your Skin 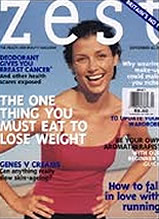 Twenty years ago, experts thought the quality of your skin, and how it aged, was largely based on genetic inheritance. So, if a 25-year-old woman wanted to know whether her skin would age well, all she had to do was look at her mother. Now, that received wisdom has been turned on its head: if you want to know how well your skin will age, look at your lifestyle....

Top Manhattan plastic surgeon Dr. Darrick Antell claims, controversially, that smoking is even more damaging to the skin than the sun because of its 'total body' effect. Since smoking reduces blood supply to all your internal organs, as well as your skin, and impairs your body's ability to heal itself, he argues that the smoker's lined skin can be seen as a reflection of internal damage, as well as evidence of a direct assault on the skin.

Dr. Antell identified smoking as the skin's biggest enemy after conducting a study of identical twins. If a twin smoked (and had other skin-damaging habits, such as sunbathing), he or she looked, on average, five to seven years older than his or her non-smoking sibling. And the damage to the skin seemed to be part of a whole package of accelerated aging. 'The ones who smoked also had more grey hair,' says Dr. Antell, ' and were a bit heavier.'

Scientists at The Twin Research Unit at St. Thomas' Hospital in London have also found that twins who smoke are more wrinkled, with skin up to 40 percent thinner, than their non-smoking siblings. It is known that smoking releases an enzyme that breaks down collagen and elastic tissue. In addition, it can damage DNA, which may have a harmful effect on the skin. Smoking also reduces the amount of nutrients reaching the skin and impedes the removal of waste products from it. 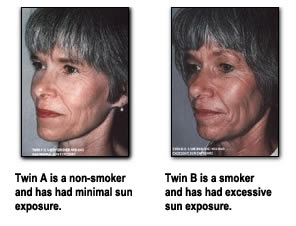 Dr. Antell's twins study also suggested that emotional stress leaves its marks on the skin. 'We had some sets of twins where one (always the older-looking twin) had had serious personal problems — the death of a child, for example, or divorce or stress at work,' he says. 'These problems would be manifested in deeper crow's-feet and in deeper lines between the eyebrows.' Stress also creates a 'fight or flight' response in the body which, argues Dr. Antell, can starve your skin of its blood supply. 'If you have more adrenaline in your system,' he says, 'this will shut down the capillaries in your skin.' In other words, when you are stressed, skin quality just isn't a priority for your body. 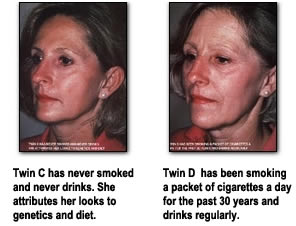