Vogue: When Breasts Start to Show More Sag Than Shape

Vogue: When Breasts Start to Show More Sag Than Shape 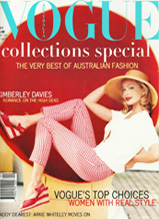 When breasts start to show more sag than shape - courtesy of age and gravity - what's the answer? Seeing her future self in her aged mother shocked Georgia Claremont into consulting one of New York's top surgeons. The result? From "fallen angel" to fabulous.

As a writer on matters pertaining to nutrients and fitness, health is my business & maintenance is my concern. Although far from vain (defined as looking into shop windows to catch your reflection), I have always taken pleasure in hearing that I looked twenty when I was thirty and feeling thirty when I was fifty. Over the years I have played, as on a game board, with prescriptives for youth extension. I have been able to affect every visible part of my body — hair, skin, teeth, nails — by means of vitamins, nutrition, exercise and meditation. And, judging by the infrequency of visits to doctors, my body's inner workings appear to have responded equally well. The one hold-out has been my breasts. Flopping and shapeless after breastfeeding two sons for an extended period, they became like islands, floating out beyond reach of any preservative. Nevertheless, we had a truce, my bosom and I. I would wear a bra at all times, foregoing the joys of strapless gowns and bikinis, if they would stay within acceptable parameters of sag. I was heartened by a lover who assured me periodically that breasts were not his thing and that, in any case, mine had a certain fallen-angel quality that he found appealing.

This delicate truce would have continued had it not been for the sudden illness of my mother, which required of me intimate ministrations over some months. I have to confess that I had never, in conscious memory, seen my mother fully naked and the reality of an eighty-year-old body that had never known a step machine or even a vitamin, catapulted me into shock. By far the most disturbing sight, however, was her breasts, which resembled the exhausted mammaries of African women who had nursed two generations while exposed to the punishing sun. Could that be me thirty years down the line? I panicked — breast sag is genetic after all.

And so my thoughts turned to the knife, and on my mother's recovery, my first gesture of self-indulgence was not a new dress, but a visit to one of New York's top plastic surgeons. The research was a little tricky. You don't phone around, as you might for a broken wrist, to find out who's the best breast man in town. But I was fortunate enough to have access to a short-list of New York's top plastic surgeons and, after carefully reading their dossiers, selected Dr. Darrick Antell. His biography detailed a backlog of experience, but what convinced me were two quotes: "plastic surgery is really about problem solving" and "you have to pay close attention to proportions". After all, we're dealing with two breasts here and it would be preferable if they matched.

So began my first venture into body transformation, a daunting road that split before me at each turn: to the left, the mythology of striving for an ideal; to the right, the no-nonsense rebuke of a puritan upbringing (what the heck are you doing?). Unexpectedly, the most fraught experience was the initial consultation. I had showered twice, put on a new bra and allowed thirty minutes to walk five blocks. I had rehearsed my questions until memorized: how much would they lift? How much pain for how long? How invisible are the scars? How soon could I resume normal life? In retrospect, I think that what I feared most was rejection. Would my breasts be the first inoperables? Told to strip (so much for the lingerie), I remained shivering in my surgical gown for what seemed like a weekend. Then, surprisingly, two doctors walked in — the very handsome Dr. Antell and a very pretty Dr. Hamilton (afraid of lawsuits? I asked her later —"male surgeon fondles breast?" — yes, she confirmed). They took my history, then pulled my breasts up and around as though moulding silly putty, until they approximated Hedy Lamarr's. "is this how you'd like them?" Wow! Absolutely! I was then given the option of two different techniques. One, the purse-string, involves a simple drawstring around the nipple. It results in the minimum scarring but also the minimum lift. The LeJour, a much-practised technique developed by a surgeon in Belgium, gives more lift. It involves a vertical incision under each breast to stitch slack tissue into new shapes. The nipple is then excised by a cookie-cutter procedure that brought to mind years of punching out ginger snaps for school fetes, with care not to sever any nerve endings, and placed higher.

Did I have any questions? Did I ever. Although different from the ones I'd rehearsed, they poured out like a mantra, the normal concerns of a normal woman intent on remaining in the loop. How soon could I exercise, party, have sex? Ride, drive, ski, have sex? Go to work, drink wine, floss my teeth, have sex? I should have picked up on the vagueness of the initial answers "we'll have you exercising soon, you won't feel like sex for a while" — but kept pressing until I got the statistics that I was looking for: walking some distance, one week; a mild workout, passive sex, two weeks; serious stairs, three weeks; riding, skiing and responsive sex, six weeks. The big question took more courage — would I retain feeling in the nipples?" Of course, the major nerve endings are in the centre and well beneath the incision." I felt relief that such pathways to pleasure were not in the hands of even the most skilled surgeon.

So there it was, a fait accompli, as simple as a health questionnaire to fill in, paying a deposit, a pre-op check-up and a date placed on the calendar for what was listed as my surgery but became, in the intervening three weeks, my new self. I approached this watershed with my entire battery of skills. I exercised massively, storing muscle as a camel does water against post-operative deprivation. To minimize bruising, I supplemented my vitamin regime with Bioflavinoids and, four days before, with pellets of Arnica. I prepared foodstuffs as if for a siege, freezing fortified soups, cubed fruits and grains and pastas laced with vegetables in one portion jars. I set up a night table with magazines, the television guide, videos and the four remote controls that even my best efforts had never managed to combine into one. I paid all of my bills, made long chatty phone calls to my mother and sons and generally put my affairs in order as though I were going to a place from which I might never return. The night before the deed I was virtually catatonic, rigid with fear that wouldn't sleep or would eat after midnight, a habit I haven't indulged in since my youth but that worried me so much that I stuck notes on the fridge and the sinks screaming No Water No Food! And, in what seemed at the time a masterstroke, I photographed my breasts in the mirror in a ritual of farewell and a document for future comparison.

I'm not sure if I slept, nor do I know how I got to the clinic, but I remember snatching at straws of limp excuses to postpone: surely I had a cold, perhaps even a fever! There was the last minute conference with Dr. Antell about procedure — was I absolutely sure that I didn't want the pursestring (well, what do you think? He thought, no) - a reassuring, if rudimentary, felt-tip pen drawing on each breast, a kindly anaesthetist who said I'd be conscious the whole time and to signal if I felt pain. Two hours later, I looked up groggily at a nurse who kept saying it was time to go home. What?! Couldn't I please just lie here for a week? But, in true American fashion, I was prised out of bed, folded into my clothes and delivered to my aunt who saw me home and eased me into my bed, fully clad minus coat. And there I remained for the rest of the day, dehydrated and bound tightly, so it seemed, in a bodice of bandages.

Little did I know that the roughest part of the day still lay ahead. Not in the confrontation with pain or discomfort, which were minimal, but in the mustering of courage. Post-op instructions were vague and distressingly few. I mean, could I lift a kettle, pull up trousers, heave myself into bed with or without use of my arms? What about opening drawers? Would coughing or sneezing rip the stitches out? There was no advice about food intake, sleeping position, bandage removal or appropriate soap - all I was told was not to bend, which turned out not to apply in my case, and to shower on the third day. Having a shower proved to be the ultimate hurdle. I was frightened of peeling away the bandages, of seeing the wounds, of meeting my own blood. And I was frightened about how my breasts would turn out. Would they look pretty? Would they be even? When concerns about hygiene finally prevailed, I taped over my bathroom mirrors before stripping. Far from restored, I felt damaged; far from transformed, I felt mutilated. I obsessed about losing body tone. And, increasingly, worried about losing my lover. Nevertheless, I had no desire to take up my life. Parties? Forget it. Stairs? Two steps loomed like Persepolis. Exercise? I wouldn't care if I ever did it again. And sex? Well, ditto.

When both doctors called to check up on my progress, questions of ultimate survival — food, sleep and muscle rebuilding — were at the bottom of my list. Forget health, forget orgasm — my priority was preservation, how to protect my new vessels. From now on I was a curator, as sensitive to the delicacy of my charges as if I were calculating how to keep two priceless items from sliding off a slope. Happily, there is nothing less permanent than a misfounded perception, nor as rapid in healing. I remember as clearly as the markers on a marathon the first time I tickled my nipples and they tickled back; the first time I raised my arms to put on a turtleneck; walked ten city blocks; washed my hair; climbed one flight; took the tape off the mirror and reached through the sheets for my lover. If the healing was slower than the guarantees that I had forced from my doctors, it was complete. My breasts now have a lovely shape, they are soft and they are even. And, yes, I do look like someone I knew well when I was courted and, yes, I do feel sexy in strapless and comfortable when braless. Soon the scars will have faded completely and I will, in some magical way, be transformed.